Ï
In this section

Sands Befrienders play a vital role in offering support to bereaved families. The reassurance of talking to someone else who has been affected by the death of a baby and who is nearby to phone or to meet is invaluable.

Sands Befrienders are parents (and sometimes other family members) who are past the first year anniversary of their baby’s death and have attended and passed Sands befriender training. 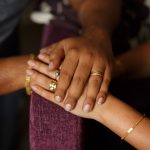